The schedule of winter tyre use, and the factors affecting it

The objective of the study was to determine, on the basis of existing data, how people time the change of their winter tyres, studded ones in particular, in autumn and spring. The specific aim was to determine the connection between the time of tyre change and the weather and driving conditions as well as the official regulations applicable to time of tyre change. Furthermore, the study aimed to assess how best to restrict the use of studded tyres in such a manner that the impacts of such restrictions on traffic safety would be minimised. The material used for the study included measurements of studded tyre noise conducted on Tapaninvainiontie in Helsinki, and tyre change statistics provided by tyre dealers Euromaster, Huoltoritarit, and Rengasmaailma.

The material allowed assessing how the seasonal change of studded tyres and winter tyres advanced from one year to another and in various parts of Finland. As regards autumn, it was evident that the advancement of the tyre change season was connected to the occurrence of snow cover (figure 1). In the spring season, however, the tyre change was postponed typically beyond the time when the snow cover had melted away (figure 2). The results of the study strongly indicated that if one wants to reduce the use of studded tyres without major impacts on traffic safety, stronger restrictions on the use of studded tyres should be imposed specifically in spring. According to an assessment made as part of the study, if the connection between the use of studded tyres, winter conditions, and the disappearance of snow cover in the spring was as strong as the connection with snow and the coming of winter is in autumn, this would only reduce the vehicle mileage of studded tyres for the whole year by approximately 2-3%. 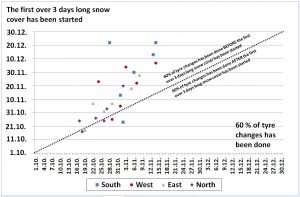 Figure 1. The connection between tyre change (60 % of tyre changes has been done) and snow cover (the start of over 3 days long snow cover) in autumn in different areas in Finland. One point represent one autumn season.

Figure 2. The connection between tyre change (60 % of tyre changes has been done) and snow cover (the end of over 3 days long snow cover) in spring in different areas in Finland. One point represent one spring season.

The most extensive research material, including hundreds of thousands of tyre changes from 2011 to 2016, was provided by Euromaster. On the basis of the material, it was possible to determine that the tyre change season begins earlier in Northern Finland and ends later there than in more southern parts of the country. At the same time, the peaks in the tyre change statistics were sharper in Northern Finland than in the south. One reason for the difference may be the larger percentage of unstudded tyres in the south.

The Finnish Transport Agency has paid attention to the fact that the rate of surfacing rut development is accelerating. However, on the basis of the material available for the study, it was not possible to categorically conclude that the season when people use studded tyres is getting any longer. However, it should be noted that the period under study was quite short.

As far as we know, this was the first time that material from tyre dealers was used on such a large scale as in this study for the assessment of behaviour related to seasonal tyre change. The material is considered to be well suited for the purpose, and it is advisable to continue its use, for example, when assessing the impacts of potential changes in the provisions on the use of winter tyres in the future.

The rapport (in Finnish) can be found from Finnish Transport Agency website.