You Are Here:
Home
The project “The effects of weather conditions on the use of anti-icing chemicals in Helsinki-Vantaa airport” completed
Facebook
Twitter
Google+
LinkedIn
Pinterest

While the demands for runway slipperiness prevention are higher than for highways, there is also a need to avoid unnecessary use of anti-icing chemicals in air traffic. However, it is extremely difficult to measure the success of chemical optimization, because the used amount of the chemicals is also affected by weather conditions. The object of this Innomikko study was to develop a weather model, which is able to eliminate the effect of various weather conditions on the chemical use, and therefore estimate the success of chemical optimization at different winter periods. In this project, the model was tested at the largest airport in Finland: Helsinki-Vantaa airport. 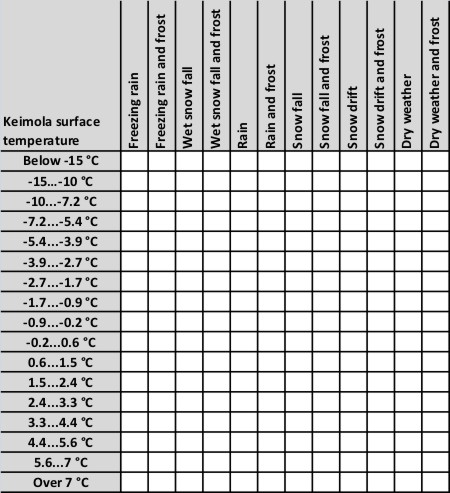 After that, it was calculated, what was the timely amount of different weather condition combinations in each winter season. Furthermore, based on chart 1, it was easy to calculate the predicted amount of anti-icing chemicals at different winters. When this prediction was compared to actual use, we got the result shown in figure 1.

According to the results, the optimization of anti-icing chemicals has been quite successful in Helsinki-Vantaa airport. However, the development at last few winters has not been as significant as at winter seasons 2005-2010.